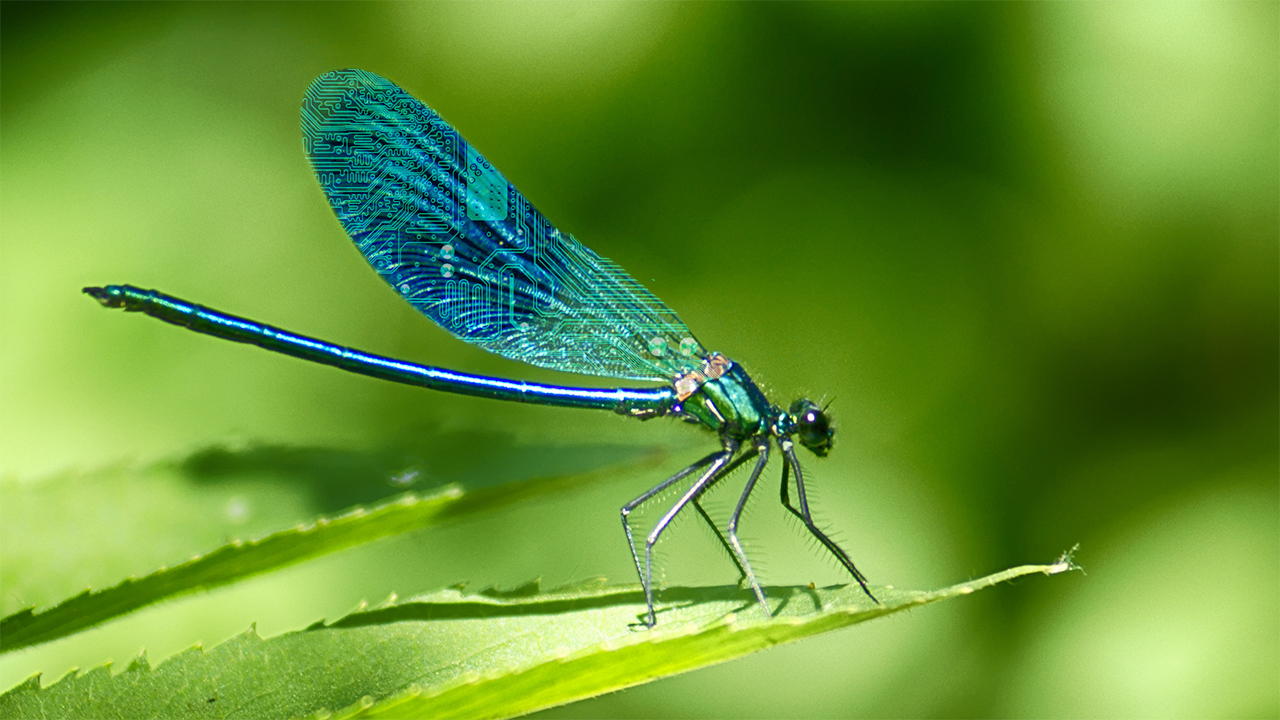 Technologically controlled bugs are not only plausible, but actually exist.

In 2017, the engineering firm Draper released details about its DragonflEye project. It showed that dragonflies can be “upgraded” with implanted solar-powered backpacks that tap into the bugs’ nervous system. The dragonflies were also bio-engineered to make them ‘steerable.’ By inserting genes similar to light-sensitive genes found in the eye, researchers can direct cells that play a steering function in the insect’s brain without disrupting the other neurons. The insects can then be steered remotely like miniature drones.

Similarly, in 2016 the US Navy granted scientists from Washington University $750,000 to make a bomb-detecting locust. The goal is to take advantage of the fact that “locusts are equipped with an exponentially more powerful and sensitive olfactory system than anything humans can artificially replicate”. Electrodes are inserted into the insect’s brain and they recover within hours. The electrodes are attached to a small backpack that allows the locusts’ natural sensory ability to be used to detect explosives. When the bugs detect the scent of explosives, the backpack sends signals to a receiver that lights a red LED when explosives are near. The team is also working on a tattoo that would convert light into heat, allowing light from a laser to remotely direct where the insect would fly.

This weak signal suggests ways that the biodigital convergence could unfold. Instead of building non-organic robots with the abilities of living things, we could use both digital and biological technologies to exploit the exquisitely evolved capacities of existing organisms. Insects with implants and biological modifications could be game changers in military, surveillance, environmental monitoring, search and rescue, and pollination.

The ability to direct the work of insects might also play a role in human efforts to regenerate degraded ecosystems. Insects may provide a publicly acceptable laboratory for augmenting and manipulating animals. Ethical concerns about augmentation and manipulation of insects are likely to be less intense than for other animals, although environmental and other issues may arise in large-scale uses. Watching the development and use of bugbots may provide hints for future debates about appropriate and inappropriate ways of altering living beings, including humans. Indigenous worldviews, and other ethical, legal, and spiritual traditions could inform our exploration of these new capacities to work with life.

Avalyne has a background in Human Rights and Communications, and spent the past decade working in International Relations and developing education programs across Canada. Her professional interests are sustainability, health, innovation and the environment. A bit of a dichotomy, her happy place is the urban bustle and deep thinking of the future, but she always finds her way back to her roots in the wilderness or by the ocean. A lover of writing, adventure, and music, she also spends time cooking and chasing after a rambunctious toddler.

From CRISPR to Prime Editor, the evolution of gene-editing abilities
Avalyne Diotte February 20, 2020

What is the biodigital convergence?

From CRISPR to Prime Editor, the evolution of gene-editing abilities