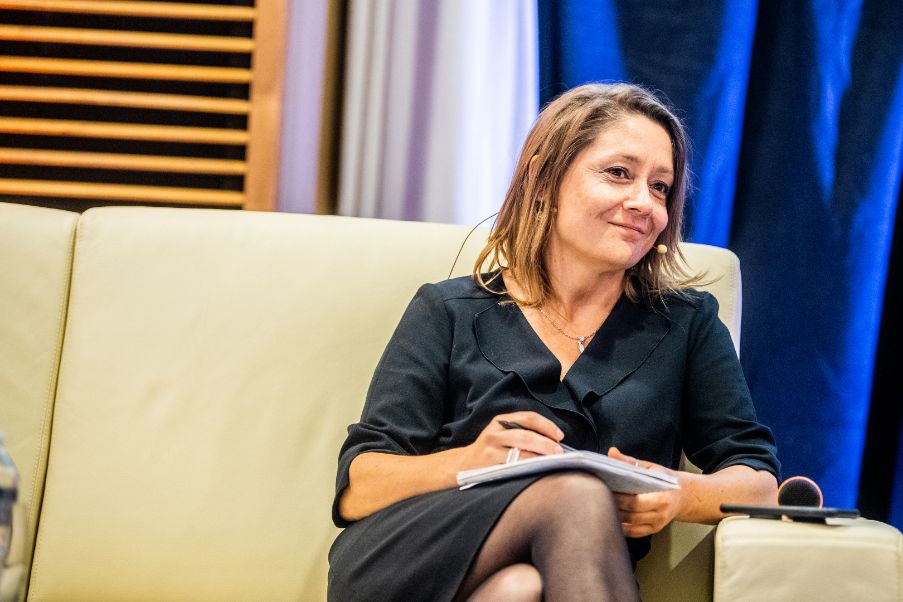 On October 15, 2019, Policy Horizons’ Director General Kristel Van der Elst summarized the insights and takeaways regarding global challenges that could impact the future, capturing the points made by various speakers during the ESPAS Annual Conference 2019.

This video was provided by ESPAS as part of the ESPAS Annual Conference 2019: https://ec.europa.eu/epsc/espas-annual-conference-2019-videos_en © European Union, 1995-2019

I won’t summarize everything because as anyone in my situation would say, the discussion was way too rich to summarize everything. But some of the things I took away is, I was quite happy to hear a lot of discussions about values. Because I remember last year conversations about evidence-based policy and the word “value” – that decisions are based on values. There was quite a bit of taboo maybe last year, and so it was very openly discussed.

So, the idea that geotechnological changes, geoeconomic changes, geopolitical changes, etc., are actually a conversation about a clash or hopefully not a clash. It’s actually about values that we are talking about, right? And Commissioner Malmstrom referred to the idea that how you deal with values in these international negotiations and conversations, and how you export values, was actually referring back to some of those common value statements that we have, like human rights, etc.

However, if we think about the future, if we are going to go into a world where you have this multi-polar world, where values become more important, where we don’t have the systems anymore to maybe sustain some of those very deeply anchored common global values – that will become more difficult, I think. And what I’m also hearing is these values – just assuming they are static – you have this multi-polar world where values won’t change and will clash is, I think, a big assumption. Because as someone was mentioning, we have the values we can afford.

And I’m also hearing still this idea that it’s all a debate between the U.S. and China – this kind of geotechnological order. But still when we talk, we talk mostly about China, the problem of China. There’s very few discussions about the value systems of how they might change in the U.S. might actually put some pressures on smaller countries. And so it seems to be an assumption that it is the Trump effect maybe for the moment, but once Trump is gone, maybe everything is going to get to be normal again. So that’s maybe something we want to look at.

A third point is as these geotechnological shifts lead to geo-economic and to geopolitical issues, it is true the risk, it’s going to increase geo-economic competition on the basis of science and technology. But many people also talked about how that would influence the future of war, maybe again an increase in investments in military, although it might not be in the same type of military. But that increase in having to protect yourself from different actors, which might not be state actors actually, because your infrastructure becomes more and more – with the Internet of Things – infused by this science and technology. I found quite interesting that at least we talk about that.

And my last point is we are hearing a lot of need for reforms of organizations, whether we are talking about these rule-based international order type of organizations, the concept of democracy. So there’s a lot of foresight needed there, I think. Because on the one side, we don’t seem to like what there is – so the easy way is to just get rid of it, as some seem to suggest. But it was also said we might want to think about what the world looks like if it is gone, right? But that should not be done to try to keep the status quo, which is more or less happening, or to gain momentum for a muddling through kind of scenario.

What I’m hearing is that there’s a real need for re-envisioning what visions do we want to create and what are the tools and organizations that need to go with that. And then there is a big tension, of course, because it needs to go fast, I’m hearing. Otherwise we get into these locked-in situations if we don’t get the WTO reform locked down in 18 months. Then we are finding ourselves with a certain “by default” situation.

So if you want to be the shaper, yes, you need to go fast. On the other side, I’m hearing you should go slow. Because we actually have to think, we actually have to make this as something collaborative, we have to ask citizens, stakeholders. That takes time. Decisions should not be created by some experts in ivory towers. So there is this tension, I have the feeling, and I don’t know how we are going to get out of that, but that is something that needs to be done.

So for me, these are four things that I found interesting, and in the lead-up from the old ESPAS’s to this one, which really came to above.

Well for me, I was there since the beginning. First of all, the room got a lot bigger, that’s for sure. So that is a testimony to success, I would say, right? As you said, a lot of people come here from very far and we all take time out of our agenda. So for me, ESPAS has been, a wonderful experience for all of us and I would – maybe I’ll make you cry, I’m sorry – but I would like to, first of all, congratulate you, Ann [Mettler]. I would like to congratulate the co-chairs of ESPAS, so both you and Klaus Welle, for all the great work you have done.

I know five years ago foresight was not a word that was practised within the European institutions. So if you see now that someone actually has at a high level, that responsibility, I can only congratulate you. I think that is due also to this organization, to your work, to the great teams they have. It’s been wonderful to work with all of you. So congratulations and I think I can talk in the name of everyone as we are transitioning, as you are transitioning potentially, is a warm, warm welcome for having organized all this and having given us this opportunity to meet and talk and have these great moments of reflection. Thank you Ann, thank you the team who is here, Ricardo, of course, and there’s a lot more other people here that we’ve seen. Thank you.