Horizons Talks: The Future of Work 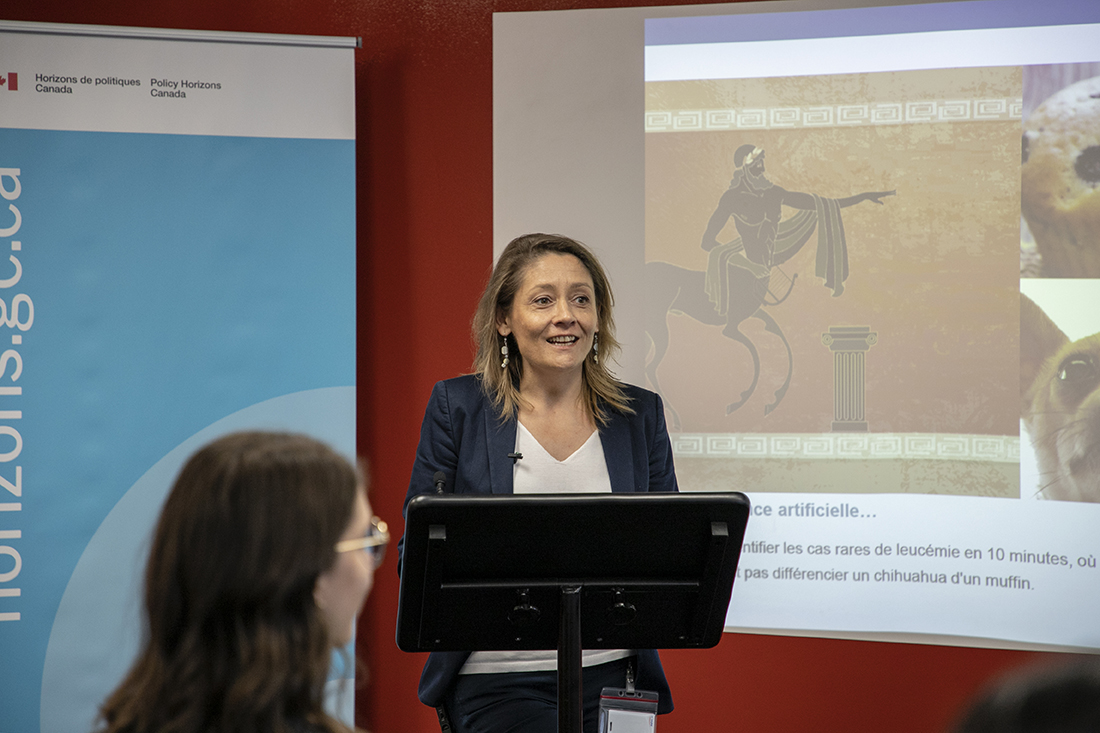 So from this work we started to look at really what it means for workers. We put kind of a zoom on that and what we came up with is mainly five big game changers. There’s five big shifts in the future of work that we are thinking are important to prepare for.

So let’s look a bit in detail more at these five game changers. The first game changer really stems from the idea that has been mentioned before, jobs will be broken down into tasks. Some of those tasks will be automated, but some of them will also be commissioned out through task-based platforms, globally.

Now, you have to know that Canada is actually a very big player and place above what you would call its weight in this area. Both in terms of how many tasks are put on these platforms by Canadian employers, as well as how many tasks are actually performed by Canadian workers. Now, on these task platforms we’re seeing that the compensation models are different. They are no longer paying for the time you’re spending but they are paying for the tasks being done. So they are outcome task-based payment systems.

It’s a highly transactional environment and a lot of those task-based platforms have reputation systems. This is actually allowing and facilitating a defining and a matching between people who look for certain talent and people who can provide certain talent. It reduces the transaction cost of finding the right talent which makes it actually an interesting system.

What does that mean?

That means that ultimately, if this trend continues, we will see the erosion of traditional employee-employer relations. Which makes that we have to rethink our social support systems because they completely, mostly, depend on those relations. The overall effect on wages from those platforms is still uncertain because it is a question of demand and supply of talent. But what we’re seeing initially is that on many of those platforms a large amount of workers are significantly paid less than what would be the minimum wages within that country where the worker is. We’re seeing a great potential for inequality between people who are actually being gig workers on these type of platforms and people who are working in the local economy still protected by the minimum wage regulations.

The second game-changer talks about reduction of demand for workers. So we have this assumption that most of our jobs, just think about your own job, are way too complex to be automated now and in the future. Another way of thinking about this is that most of our jobs are actually partially automatable. If we look just at the numbers for the public service on average, the estimation is that somewhere between 40 and 50 percent, depending on sources, of the jobs are actually in that category of partially automated. So it is the tasks within your jobs that are automatable that will be automated.

But cumulatively, across the industry, across functions, that means that ultimately you will see a demand for workers. Now that effect might also or this might go faster than what one might expect. It’s already been alluded to but we’re seeing the emergence of robot-centric workplace design. What it means is that we’re seeing whole manufacturing sites. Whole distribution sites, for example, that are purely designed to work with the limitations of technology. There is not a single person working in those manufacturing sites or these distribution sites and they work 24 hours a day.

What does that mean?

The erosion of opportunities, work opportunities, might go a lot faster than one might expect. Because of what we’ve just said, but you also have to imagine that when a task gets automated in one sector, that great idea or that great solution might be transferred very easily into the different sectors of the economy that hold that same function. So you could see through the economy a very big ripple effect.

We think we might be facing a future in which we see structural unemployment. Because there’s a lot of uncertainties about the fact that the people who are losing their jobs can be reskilled in a reasonable time to be able to take up the new jobs being created in the Next Digital Economy. It is said that if reskilling takes more than a year you start to see back on GDP. So sometimes retraining might be a bridge too far for certain people.

We also see the emergence of what we call centaur work. So it is partially done by humans in close collaboration with machines. It could be great for outcomes. It can be great for efficiency. But from a human perspective what that means is that all humans will still be doing is too complex tedious tasks, really difficult cases will have to be managed still by humans which might obviously put more stress on human work.

This is just an example to show you how a very old job of a farmer might be changing in the future. You will see here, you will no longer or she will no longer be driving any of the machines in agriculture but will be remotely controlling potentially ten of those machines at the same time. So these are different skills, different type of jobs, potentially a lot more efficiency and potentially being done remotely.

You hire them, you train them and then you get them to do the job. Which, with AI, you take one AI system that you train to be able to do the job. If you need more workers capacity you just increase your AI capacity at near zero marginal cost. So once you trained one car, self-driving car with AI, a taxi car for example and you want more self-driving taxi cars, you just kind of copy the same AI into those cars which creates a lot of potential growth from a profit perspective but certainly not increasing jobs. It’s important to note that this is going to effect high-skilled workers also.

Now, if we think about centaur work we can be optimistic and also see that there will be a great potential to increase the capacity, actually the quality of knowledge work and yeah, I’ll come back with an example, but the implication is that we will see a lot of jobless growth, right? As we said. The risk is that because it is based on AI and AI is based on data and data happens to be a game of skill and scope, so by consequence, there is a big risk that those type of profits coming from that jobless growth will be captured by mega firms.

And we will go into also a great economy where we see a lot of creative destruction with new models emerging and fierce competition. In that type of an environment an organization will see humans rather as liabilities than assets. So just as an example on centaur work, we see that, we just find this fun so, on the artificial intelligence, working humans together with the AI we see that for example rare cases of leukemia can be spotted in ten minutes instead of two weeks, right? That’s great, but we’re seeing also kind of the limitations because AI seems to fail to differentiate between Chihuahuas and blueberry muffins. So we still need humans for some type of things.

So the fourth game changer talks about the diminishing role or the complete disappearance of human intermediaries. Because of all the technologies that we have mentioned before across the value chains, there is a huge number of human intermediary functions that actually can disappear. And it’s essentially any job that focuses on facilitating either an agreement or a transaction between two other humans is at risk. You can imagine how many functions that is. It is a lot of white collar jobs that will be eroded with that and it has positives, you know, when we change humans with technology it decreases cost, it actually increases efficiency and that could bring us to a world where actually, bespoke, niche, specific objects can actually start to compete with batch produced, mass-produced products, decreasing prices overall.

Just as one example here, you know the picture you see here that’s kind of your new mailman in the future, potentially, and if we look at Amazon, who’s a really big player in our economy, they are integrating vertically and kind of horizontally integrating the whole logistics transportation chain for the moment. Very few people know that.

But just imagine the number of workers who are doing kind of, you know, handing it over from one logistics company when it comes off the boat and it goes through the border control and it gets onto a truck etc etc. All these people along a logistical chain are just disappearing because of these type of optimizations.

The last game changer talks about separation of where people work and earn and where they spend and live. We’ve already discussed a couple of times how knowledge work can be done remotely. We can easily imagine that you have the telemedicine, you have the translation, you have the architectural planning etc.

But also we see increasingly physical tasks being performed remotely. That’s through the advances of advanced telepresence but also mixed reality and this type of technology. So if we imagine that it is post cognitive, the knowledge work and the physical work can be done remotely, we can see that we’re entering as already it’s been alluded to, a highly competitive global labour market and as Marcus mentioned that is fantastic for plenty of people in the world, that might be less fantastic for Canadians who are living at the high cost of living.

We are seeing the decoupling of the primary economy and the secondary economy which might ultimately influence your career choices. For example, a barista might be paid a lot more than a gig worker because you are in the local economy. We’re seeing actually the emergence of some jurisdictions who are starting to already really take this trends into an account and they move from a development strategy of trying to attract firms and jobs into a strategy of trying to attract these remote workers and their spending. That is happening and that competition across jurisdiction will probably increase significantly in the future.

And then, as already has been said, all this will lead to a whole lot of taxation issues and of the administration of taxation, actually, because it’s really hard to know who’s doing what, who’s producing which type of work, whether it is declared or not, if the platforms will help declare or not and so getting those taxes might be an issue.

So this is kind of where we will leave it for the moment. So we’ve been discussing kind of, you know, just as a reminder, these eight technologies, potentially, when they mature and combine, will kind of significantly change the economy. We been talking about impacts for workers, for firms, for the different industries, what that might look like and then we have been discussing what it actually might mean for different workers.