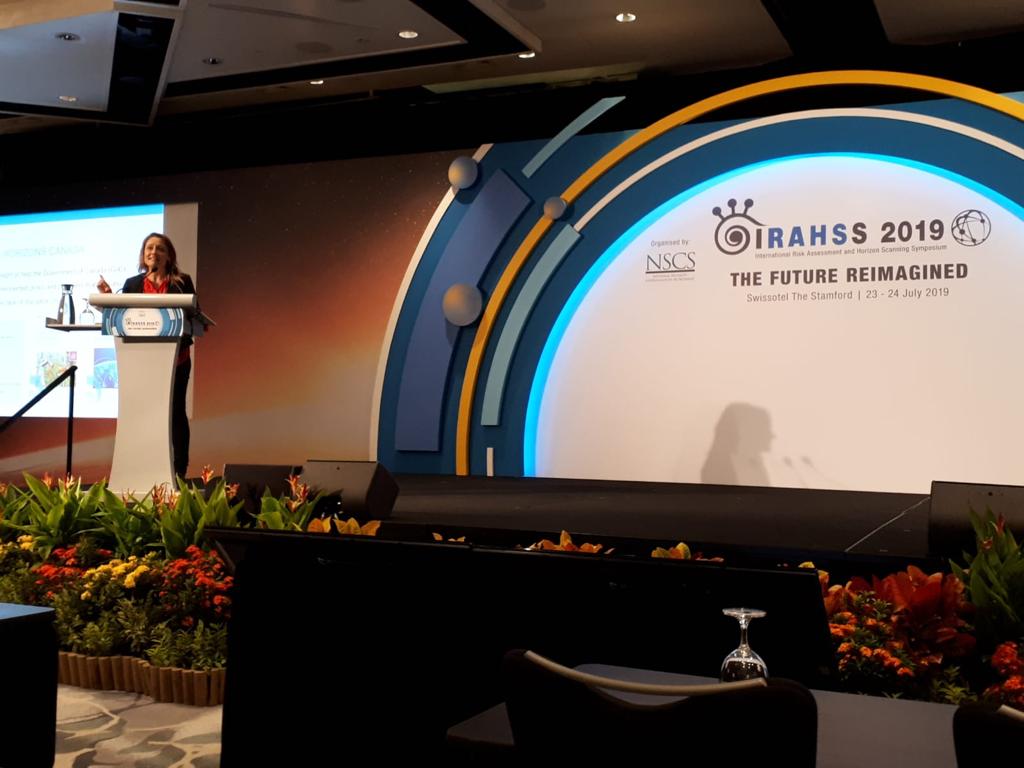 The theme for IRAHSS this year was “The Future Reimagined”. The presentation was part of the session on “Society Reimagined”, exploring the future advanced society with the advent of new technologies.

Policy Reimagined to Support Society in the Next Digital Economy

While previous transformative technologies changed economic principles, institutions, societies, and behaviors, the current ongoing technological transformation could be faster and more globally spread than previous ones, creating turbulent times where foresight and adaptive capacity are key.

We are already in the midst of significant changes due to digitization and the existence of cyberspace. However, we need to prepare for much more change that is to come. A broader suite of emerging technologies are maturing and combining, and will significantly change the fundamental organizing principles of the economy and work. At the same time, we will undergo the convergence of the physical world and the cyber world. And in parallel, we will see the convergence between digital and biological systems. All of these changes will have major impacts on human lives.

The challenge for governments is significant if it is to harness the transformative potential of future technologies while mitigating their potential pitfalls.

I will address some of the policy domains that need to be reimagined and will shape the social acceptability of the technological transformations we are facing, and thus the future societies we might live in.

The first one is regulation to protect citizens against potential harm. We need to make sure that technological developments are safe, ethical, and aligned with our values. These values are very country-dependent. We should also consider the broader context where the world’s borders are increasingly porous, and science and technology developments are becoming strategic resources for competitive advantage.

We need to rethink competition and data protection laws, as they will have a profound effect on what business ecosystems and value-capture models will emerge.

We need to re-examine health, consumer, and environmental safety regulations. In a world where you can quickly and locally 3D print any good from a digital file that might have come from anywhere in the world, how can we, as a government, safeguard our citizens when people print out spatulas made from toxic materials, or prevent people from printing firearms?

We also have to rethink regulation around labour and workplace standards and human rights. On task-based platforms where gig workers find their work, compensation models are often outcome-based. Workers do not get paid for the time spent on the task, but on the results. So how do we impose minimum wage protections? These task-based platforms also seem to lead to lower wages. For example, a 2018 study of 3.8 million tasks conducted on Amazon’s Mechanical Turk platform found a median hourly wage on their platform of around US$2, with 96% earning less than the U.S. minimum wage of $7.25 per hour. How do we know these gig workers are not children? What happens when workers using these task-based platforms in other countries are required to provide information that may conflict with local laws?

And finally, intellectual property and privacy enforcement is crucial but complicated in a digital world.

The second policy area we need to reimagine is our social support systems, to help citizens through the transition. Although in the long run everything might work out and new jobs will emerge, we will go through an employment transition. We are moving into a world where the traditional employee-employer relationship may erode because of the rise of task-based platforms and the gig economy. Further, in the turbulent and competitive times of creative destruction, long term commitments to humans might be seen as a liability by firms. Most of our social support systems are based on this traditional relationship, so we need to rethink that.

Automation and robot-centric workplace design will reduce the demand for workers. For example, entire manufacturing and distribution sites are designed to operate without a single human on site. We might end up in a world with significant structural unemployment and underemployment. Traditional business cycle thinking might not hold anymore; jobs might disappear and not come back. There is uncertainty around if and how workers can be retrained and reskilled. Will there be people left behind? Whose responsibility is it to reskill these workers? And even if we were successful at retraining everyone in the world, developing countries might still face a problem. The workers retrained for this new digital economy will be living in an economy with a global competitive labour market where a lot of the work, whether cognitive or physical, can be done remotely. So if you live in Canada and you are reskilled, you might still not be able to make a living, because someone somewhere else in the world might be underbidding you due to a lower cost of living. Governments need to prepare for this, otherwise we may be unable to help our citizens through this transition, and might end up with resistance to change that limits society’s ability to reap the benefits of emerging technologies.

Another important aspect to rethink is wealth distribution. We have to make sure that the benefits of the transformation, especially the financial benefits, are equitably distributed across society. In our studies, we find inequalities could be deepening and broadening.

Although the evolution of average wages in the future is unclear, there may be more income inequality if nothing is done. Workers with automatable skills will see their wages fall, while those with rarer skills that cannot easily be automated or that respond to the needs of the new economy may enjoy higher wages.

We may see greater generational differences. The older generations have created their wealth in the old economy and they might actually do relatively well in the future digital economy, as prices could decrease. Meanwhile, younger people might face the difficulties of decreasing wages or even a lack of economic opportunity.

We are also likely to see discrepancies between experienced and inexperienced workers. If all the “simple” tasks are done by technology, the only tasks that remain for humans are the difficult jobs, which usually need expertise. Centaur work, which is the close cooperation between humans and machines, could increase stress for workers, as they are left doing only complex tasks. An additional question is how do you get people to be experts in the long run if they cannot gain experience?

We will also see inequalities between gig workers, those in precarious work situations, and those with protected jobs. Government jobs, for example, tend to be protected, as are local jobs that are part of the secondary economy that fall under local labour laws and minimum wage regulations. You could imagine that in the future, your child might prefer to become a barista in Ottawa at CDN$15 an hour rather than being an architect, for which there is competition on global gig platforms and which, at present, is valued at a rate of CDN$3 per hour.

We also have to think about the difference between people who use technologies versus those who own the technologies. We have to consider the possibility of jobless growth. The people who will reap the financial benefits of this jobless growth might be doing very well in the future. For example, artificial intelligence allows us to create additional capacity for knowledge work at near-zero marginal cost, and automated manufacturing and distribution could displace workers, while making the owners of these technologies very wealthy.

A traditional way to handle inequalities is wealth redistribution through taxation – and if sufficient tax revenues are available, they can be handled. However, in a world where economic activity is increasingly global and digital, taxation becomes more challenging. In the digital economy, it is more difficult to determine where value gets created, what part of the digital value chain should be taxed, and how much of the production or added value occurs within a government’s jurisdiction.

There might be downward pressures on all types of tax revenue. Income tax revenues could come under stress in high-income countries if we see global wage convergence, and it might also be difficult to collect accurate income tax revenues from gig workers. Platforms themselves are reluctant to take on the burden of collecting taxes or share customer data with governments. Corporate tax revenues could fall due to jurisdictional issues and reduced profits in a hypercompetitive economy. Value-added taxes could also be reduced if prices continue to decline, given the marginal costs of digitized goods and services, and the increasing proportion of digital goods and services in the consumer basket.

There are several international processes, like the OECD and the EU, exploring how to tax goods and services in the next digital economy. Recently, the G7 released a statement of intention to work on this problem. France has passed a law taxing the big tech companies. There is a lot of work being done, but it is commonly well understood that it is a very difficult nut to crack, especially in a world with shifting international relations. This is crucial because if people feel that the effects of technological transformation are unfair, societal resistance may emerge against more than just specific business models.

Beyond specific policy areas, policy advice and policy making needs to be reimagined to make sure we end up with a society that we want to live in.

There is great hope that with more technology, more data, and more analytics, we will be able to make better decisions with evidence and data-based policy making. This is based on a number of assumptions. One assumption is that governments actually have access to the required data. A lot of data sits with companies, and it is unclear why any company, without being forced to, would hand that over. Another big bucket of data sits with citizens, with all of us. Whether citizens will trust their governments sufficiently to be good stewards of their data is another assumption.

Assuming that the data would be available, we should not forget that policy making does not happen in a vacuum, and citizens’ values, preferences, and desires need to be taken into account. New technologies are getting more and more invasive in our lives, and the long-term consequences of those changes are very often underestimated. In policy making and when providing advice in areas of science and technology, we need to go beyond technological forecasting and integrate a systematic assessment of social impact. We cannot really know all impacts that might occur, but we need to put in the effort to explore what might happen, engage with a broad set of people, and explore their hopes and fears about the potential developments so that together we can design a future we want. It is complicated and time-consuming. It is different from the modus operandi in many countries. However, it is essential for governments to keep the trust of its citizens through this big transformation. Some countries have already started incorporating more stakeholders in decision making and find it brings them value.

The last point I will end on is that we might have to review our metrics. There are a lot of benefits to be taken from scientific and technological advances, but they might not adequately translate in our economic and monetary metrics. When governments do policy making, they have to think about what is actually the end goal, what we should measure. We all know that whatever we measure defines what we do and where we go.

Thank you very much.