Climate Change and the Risk of Displacement in Asia 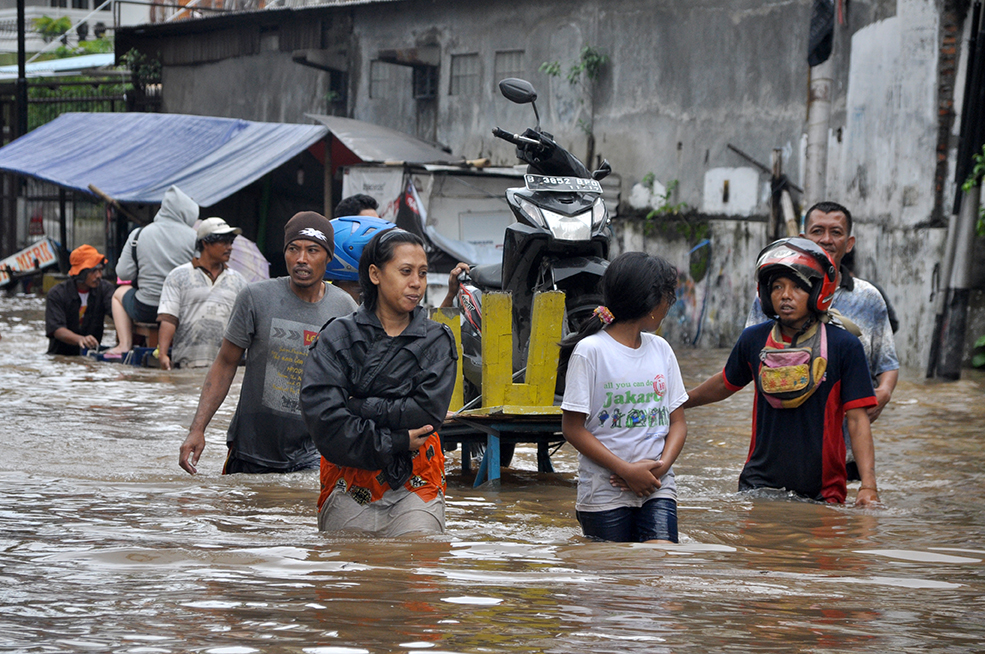 PDF: Climate Change and the Risk of Displacement in Asia

The Asia Pacific is highly vulnerable to climate change from rising sea levels and intensified storms. The displacement of people that this can lead to has created a new category of migrants: climate refugees. The threat of climate change impacts not only island states such as the Maldives, where 14 islands are already uninhabitable, but also low-lying coastal countries such as Bangladesh and Vietnam, where millions reside in areas less than one metre above sea level. An estimated 25% of the world’s population lives in the area around the Bay of Bengal, placing more than half a billion people at risk.

Asia’s high population density, particularly in coastal megacities, intensifies the scale of the challenge for policymakers. According to a study by the Center for Global Development, Asia accounts for seven of the world’s ten countries most vulnerable to rising sea levels: Bangladesh, China, India, Indonesia, Japan, the Philippines and Vietnam. In just two years, 2010 and 2011, 42 million people in the Asia Pacific were displaced due to disasters caused by climate change.

Sea levels are expected to rise by 15 centimetres by 2030. If that happens, large parts of cities such as Ho Chi Minh City, Jakarta, Manila and Bangkok would be flooded and face water scarcity challenges as saltwater intrusion contaminates freshwater supplies. Moreover, the number of people at risk in Asian coastal cities could rise from 300 million to 410 million by 2025. While displacement is most likely to occur within countries, international migration, especially from island states, is increasingly possible.

Governments, private companies and regional institutions are starting to initiate policies to mitigate future risks of rising sea levels and flooding. Thailand launched a $9.8 billion project which invests in flood and water management systems. Bangladesh is growing forests in coastal areas, building evacuation centres and introducing disaster insurance. The Maldives is seeking to elevate reclaimed land to better withstand rising sea levels. Japan has allocated $1 million for research funding on disaster loss and damage in the region. Meanwhile, the private sector has also introduced creative solutions. For example, Japanese firms are experimenting with floating cities. Telecommunication companies in the Philippines are offering mobile phone money transfers to assist victims of disasters who do not have bank accounts. The Asian Development Bank (ADB) has introduced the Asia Pacific Disaster Response Fund to provide financial aid in national emergencies. ASEAN (the Association of Southeast Asian Nations) has collaborated with the UN (United Nations) to focus on operational issues and capacity building, particularly on risk reduction and prevention.

Despite these efforts, many developing countries in the region remain inadequately prepared. They lack the infrastructure and capacity to mitigate and respond to risks associated with climate-induced disasters that trigger displacement. Aside from the lack of a legal framework, existing challenges in the region, such as an inadequate disaster management framework, water scarcity and rapid urbanization, make adequate preparation all the more difficult.

Inadequate international legal framework: Debates on how to define this group of migrants (as ‘climate refugees’, ‘climate migrants’, or ‘environmental migrants’) highlight the lack of common understanding. The 1951 Geneva Convention Relating to the Status of Refugees has not been amended to incorporate climate-induced migration. The 1992 UN Framework Convention on Climate Change highlights adaptation strategies, but does not directly address displacement of people. The problems also exist at the bilateral level where

Inadequate disaster preparedness and risk management: Many programs are reactive and offer short-term relief to climate-induced calamities and displacement rather than a long-term solution. The lack of resources has prevented governments from investing in basic infrastructure and services including health, water and sanitation that would enhance communities’ resiliency and reduce the likelihood of migration.

Limited insurance penetration: Governments often lack financing strategies to fund disaster relief and post-disaster rehabilitation. While 40% of losses are covered by disaster risk insurance in developed countries, the figure is less than 5% among Asian countries. Moreover, insurance policies rarely cover migration, let alone climate-induced migration. To the extent that they do, it is usually part of a broader policy covering a variety of causes for loss.

Urbanization: With an average of 64% of the world’s urban growth attributed to migration flows in Asia, climate-induced displacement is likely to exacerbate existing challenges caused by rapid urbanization in the region. The inundation of agricultural farmlands, flooding and dwindling water supply have already spurred rural dwellers to migrate to cities. Bangladesh has implemented a migration strategy that has encouraged rural-urban migration. However, many of Asia’s densely-populated megacities lack the basic infrastructure to accommodate migrant inflows. For cities, finding a sustainable solution to increased climate-induced migration will be a key challenge.

Canada is ranked seventh among the preferred migration destinations in the world. For the past five years, Asia has been the top region of origin for immigrants to Canada. From 2006 to 2011, 56.9% of immigrants came from Asia. Moreover, the top countries of origin – China, India, the Philippines and Vietnam – coincide with the list of countries most vulnerable to the effects of rising sea levels. Canada will need to consider how to incorporate the notion of climate-induced migration into its existing immigration and refugee policy framework.

At the same time, this climate-induced displacement provides Canada with a platform to demonstrate its commitment to Asia. Canada can capitalize on its strength in non-traditional security, particularly by providing international humanitarian assistance. Such instances of cooperation are already underway, as demonstrated by Canada’s aid to flood and typhoon victims in Sri Lanka and the Philippines. A strategic opening also exists for Canadian financial institutions to enhance disaster resilience by providing disaster risk financing instruments such as calamity funds, catastrophe bonds and other financing options.

Asia-Pacific Migration and Environment Network. “When Disaster Strikes: A Look at Climate-Induced Migration.(link is external)” 2011. (VIDEO)

Amrith, Sunil. “The Bay of Bengal, in Peril from Climate Change.(link is external)” The Economic Times 14 October 2013.

Ozimek, Adam. “Is the US the Most Immigrant Friendly Country in the World?” Forbes 18 November 2012.

Statistics Canada. “Immigration and Ethnocultural Diversity in Canada.(link is external)” 2013.

“Turn the Heat Down: Climate Extremes, Regional Impacts and the Case for Resilience – A Report for the World Bank by the Potsdam Institute for Climate Impact Research and Climate Analytics.” Washington DC, US. World Bank, June 2013.