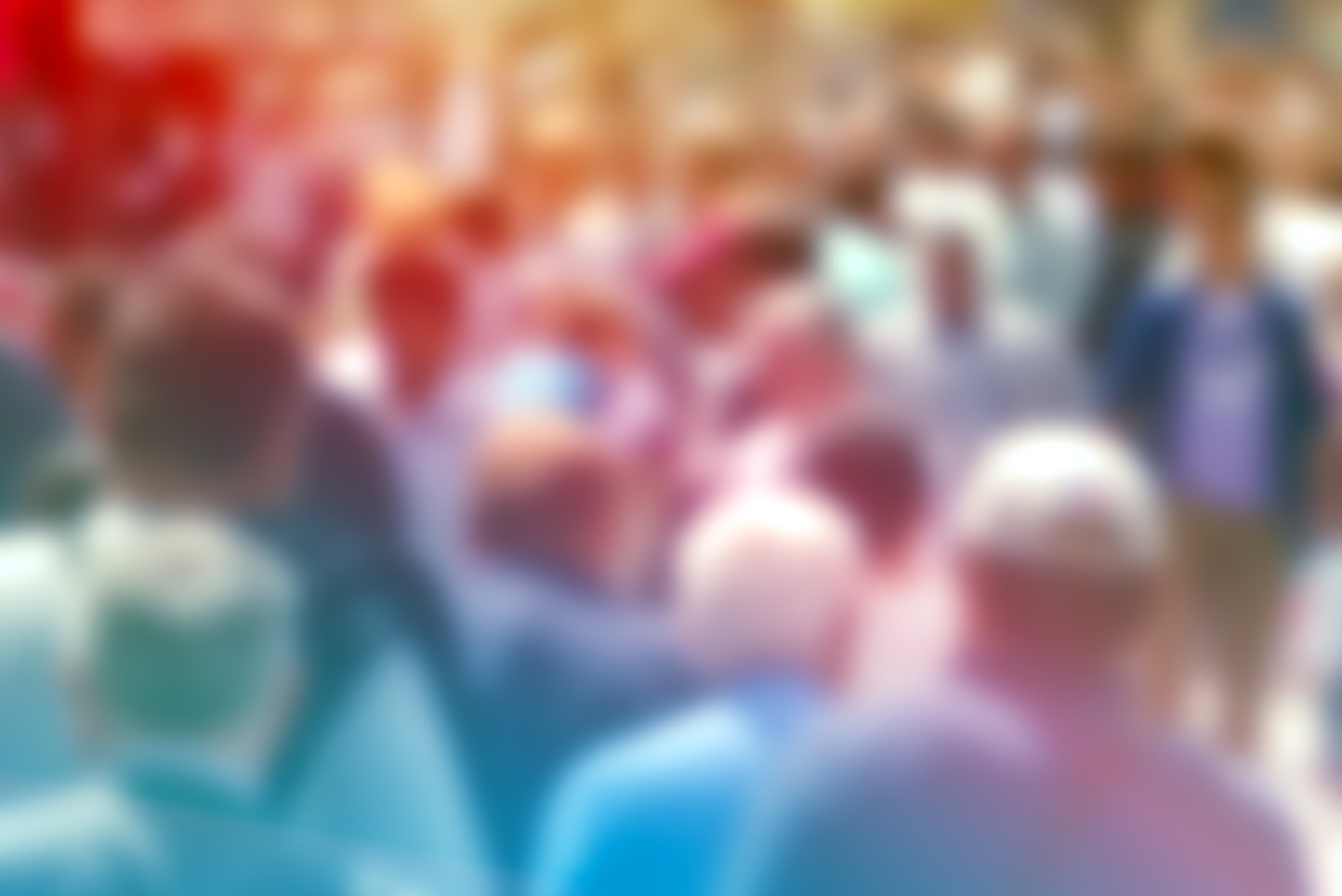 What is the insight?
Why is it important?
How will it impact Asia?

How will it impact Canada?
References 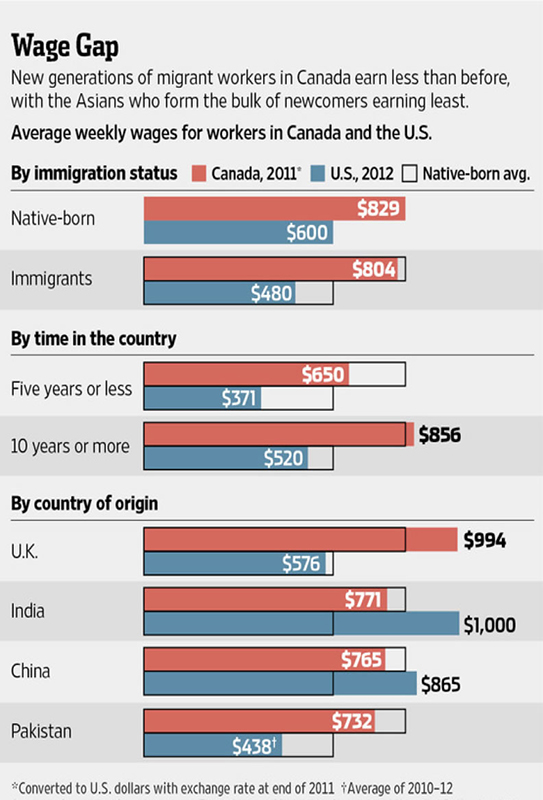 Bar chart showing wage gaps more specifically the difference in an average weekly wage for an immigrant worker in the Canada and the States. The chart shows 3 different aspects: by immigrant status, by time in the country and by country of origin.
Source: The Wall Street Journal

Over the past few decades, a steady stream of migrant talent and labour from Asia has given receiving countries, including Canada, a competitive edge in the knowledge-based global economy. Many of these migrants not only come with sought-after skills and training, thus contributing to the constant flow of “brain gain”, but they also help sustain a relatively young,fertile, and taxpaying population in a highly mobile and aging world. As a result, a country’s ability to attract human capital from around the world is now regarded as crucial to that country’s overall social and economic development.

Attracting talent is important for fast-developing economies such as China (see Figure 2), India (see Figure 3) and various countries in Southeast Asia, whose demand for skilled workers has exceeded what it can produce. The need for workers in Asia is currently predicted to rise 22% over the next decade. Drawing a young and fertile workforce is now essential for rapidly aging and low fertility countries such as South Korea and Japan. Furthermore, the development of research and education sectors has become a priority of Asian countries such as Singapore and Malaysia, either to pull in the “brightest and the best” researchers, or to entice well-off international students. In this way, reverse migration could provide the solution for many of Asia’s emerging needs.

At the same time, the migration of some of Canada’s most valuable workers to Asia will impact its ability to keep pace in the global race for talent and progress. Canada’s inability to retain its largest migrant population will not only negatively affect its demography and economy, but also its international reputation as a migrant embracing country. In addition, the loss of Canada’s highly ranked global talent will prove highly detrimental to the country’s development. 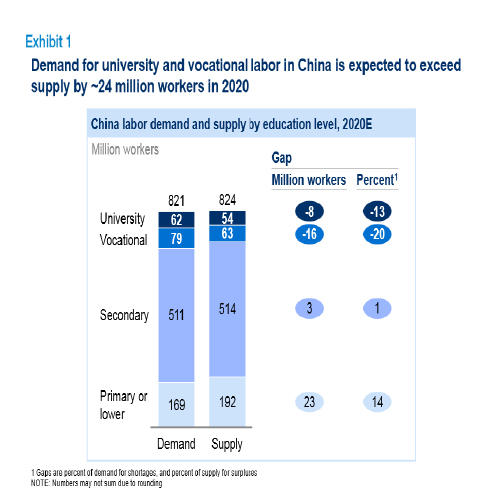 Reverse migration will enable the region to meet increasing demands for talent, students, and a youthful workforce. However, Asian countries will also need to consider the potential negative consequences of this trend.

In recent years, several countries in Asia have joined the global competition for talent and skilled workers. Both India and China have committed significant financial resources to lure back some of their best talent from abroad by providing incentives such as well-paid jobs, high socioeconomic status, and talent growth. China has developed a nation-wide policy of human resource development with initiatives such as the Thousand Talents Program. Launched in 2008 to attract 2,000 professors from foreign universities or research institutes over the span of 10 years, the program has succeeded in recruiting 4,000 so far. Other countries such as Japan, South Korea, the Philippines and Vietnam, are also beginning to invest heavily in policy changes to more effectively draw expatriates and skilled workers. Vietnam, for instance, is estimating to have spent over $7 million. The various policy changes include tax incentives, financial compensation, increasing the number of international schools, and reforms to visa and permanent residency requirements. The trend of reverse migration will likely assist Asia’s efforts to recruit and retain talent.

Countries such as Malaysia and Japan are striving to be the region’s hub for international education, as their schools will benefit from an increased reverse flow of international students. As they compete, they are vying to retain the best and brightest, as well as compete with Western institutions for the top students and faculty members from other parts of the world. Malaysia has succeeded in increasing the number of local PhD students from 4,000 in 2002 to almost 40,000 in 2012, while the proportion of international PhD students rose from 25% to 50% in the same decade. Top institutions from China, Japan, Singapore and South Korea are gaining global recognition with a rise in their global university rankings and increasing flows of international students.

Asia, particularly East Asia, is currently undergoing a major demographic transition with its rapidly aging populations and low fertility rates. According to median UN forecasts, 40 percent of Japan’s and South Korea’s population, as well as 28 percent of China’s, is expected to be composed of people 65 or older by 2050. Asia’s most developed economies such as Taiwan, Japan, South Korea, Singapore, and Hong Kong, currently have some of the lowest fertility rates in the world. To a lesser degree, various parts of Southeast and South Asia have also begun to observe similar trends. Vietnam’s population for example, began to age in 2011, and the declining birth rate in Brunei has caused concern amongst its policy makers. Reverse migration could help provide demographic stability to these countries, as well as a more favorable ratio of seniors to working-age people.

Leaders will need to prepare for the possibility of accelerated reverse migration becoming a force of disintegration for societies in Asia, particularly those that have long been homogeneous. Recent immigrant countries such as South Korea and Japan are already reporting stirrings of xenophobia towards foreign workers and cultural clashes with returning expats. Singapore’s target to attract 150,000 international students by 2015 was recently halted due to the public’s growing unease with the influx of foreigners. Without a welcoming environment for its incoming migrants, the benefits of this trend will be short-lived.

Although the overall fiscal impact of immigration on OECD countries has been small but positive, countries with a relatively older, pension-receiving, immigrant population have reported negative levels of contribution. As such, Asian countries currently without a stable or quickly expandable social welfare infrastructure must prepare for the possibility of a negative fiscal impact with the influx of older migrants. Employment is currently the most important factor in determining whether or not a migrant’s fiscal contribution is positive. Thus, receiving governments will be need to prepare adequate infrastructure for employment opportunities and credential transferability in order to prevent the negative fiscal impact of reverse migration. 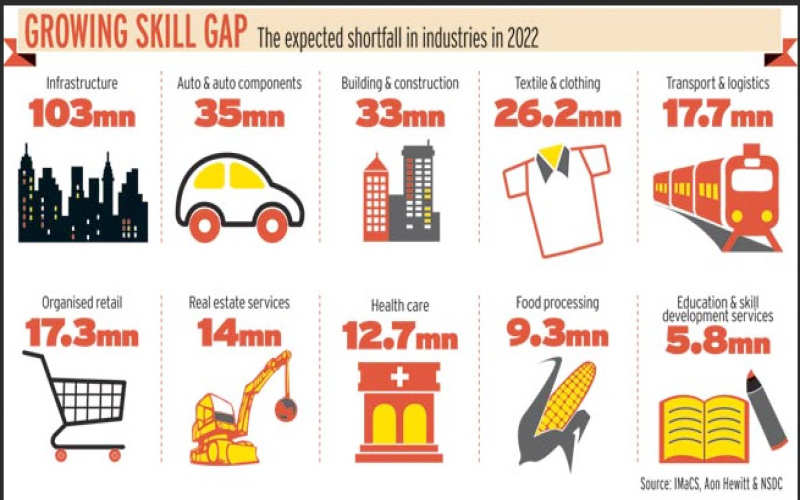 Since Canada’s largest flows of immigration come from countries in South Asia and East Asia, the possibility of their reverse migration will be detrimental in many ways. First, a decrease of its youthful immigrant, diaspora, or opportunity-seeking population means that Canada will be more vulnerable to the consequences of rapid aging and low fertility rates. Second, the trend of return migration will parallel the loss of significant talent and skilled workers. Immigrants to Canada have made major contributions in various sectors, including research, literature, and the performing arts. The return of this pool of resources and the drawing away of Canada’s own highly ranked global talent will have a significant impact across Canada. Third, if Canada is unable to respond to reverse migration in order to retain its highly-skilled migrants, Canada’s current image as a leader in multiculturalism and in recruiting global talent could be negatively impacted. As a result, there will be a need for governments and businesses in Canada that rely on foreign talent to fill critical shortages, to push for stronger measures to attract and retain global talent to keep Canada’s competitive edge.

“From Hong Kong to Canada and Back: The Migrants Who Came Home From Home.(link is external)“, South China Morning Post, 28 May 2013.,

Ministry of Education, Culture, Sports, Science, and Technology Japan., Outline of the Student Exchange System: Study in Japan and Abroad., 2008, http://www.mext.go.jp/component/a_menu/education/detail/__icsFiles/afiel…(link is external)

“Reverse Migration of 3L Indians on card?”, The Times of India, 2 Nov. 2012., http://timesofindia.indiatimes.com/business/india-business/Reverse-migra…(link is external)

“Tens of Thousands of Hongkongers Return from Canada since 1996.”, South China Morning Post, 25 May 2013., http://www.scmp.com/news/hong-kong/article/1245494/tens-thousands-hongko…(link is external)

“Thousands of Chinese-Canadians lured back to Hong Kong by better job prospects than Vancouver can offer.”, National Post, 27 May 2013., http://news.nationalpost.com/2013/05/27/chinese-canadians-lured-back-to-…(link is external)

“Vietnam’s Population is Aging the Fastest in the World.”, VietNamNet, 12 Jul. 2013., http://english.vietnamnet.vn/fms/society/90858/vietnam-s-population-is-a…(link is external)