When Energy Technology Goes on Steroids: The Nano-Energy Interface 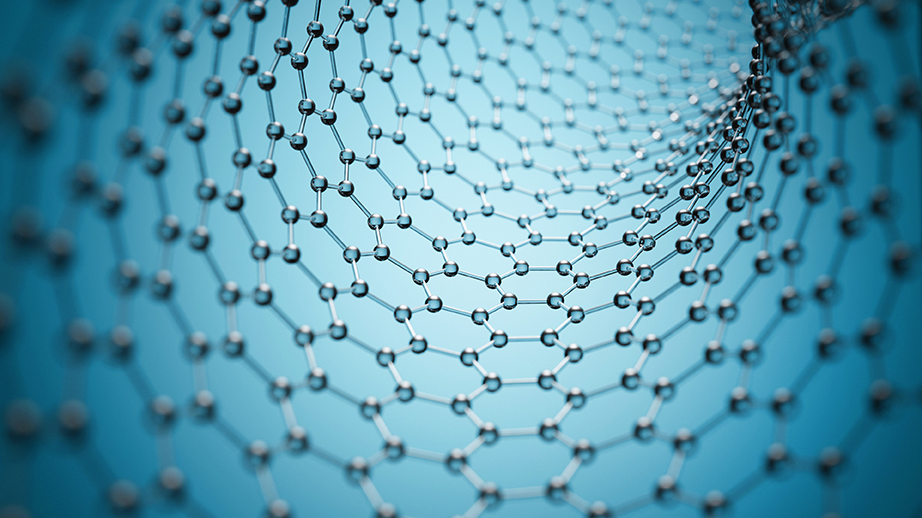 PDF: When Energy Technology Goes on Steroids: The Nano-Energy Interface

In the not-so-distant future, nanotech is positioned to create significant change across several domains, especially in energy where it may bring large and possibly sudden performance gains to renewables and smart grids.  On price per watt basis, innovative applications of nanotech have the potential to triple the output of solar, and double in the case of wind.  Nanotech enhancements may also increase battery power by orders of magnitude, allowing intermittent sources such as solar and wind to provide a larger share of overall electricity supply without sacrificing stability.  Nanotech sensors will also enable smart grids and foster more flexible and decentralized electricity management.

Emerging research suggests that there is great potential for disruptive change – thereby warranting further consideration of the implications for Canada’s electricity generation and distribution infrastructure, as well as for business opportunities in the global energy market.

Policy Horizons Canada is currently undertaking a foresight study on emerging technologies, with nanotechnology being one of the areas of focus. As a powerful enhancer of technology, nanotech can be seen as the “steroids” for certain technologies. Nanotech is positioned to create significant change across several domains, especially in energy where it may bring rapid efficiency gains in renewables, smart electricity grids and even reduce environmental effects of conventional energy sources.

What is nanotechnology? Nanotechnology is the engineering of functional systems at the molecular scale. Scientists and engineers are discovering a wide variety of ways to change materials at the nanoscale to take advantage of new and remarkable properties, such as higher strength, lighter weight, enhanced conductivity, and greater chemical reactivity than their larger-scale counterparts.

Despite significant progress in recent years, most renewables cannot compete with conventional energy options since they offer less on a dollar-per-watt basis. Nanotech, however, may accelerate the technology behind renewables in various ways:

Solar (photovoltaic) is a good example of how nanotechnology can accelerate the progress of a technology. Graph 1.0 shows how solar is coming down in price, and how its ability to compete against traditional energy choices may happen even more quickly due to nanotech. Economic disruptions could therefore occur sooner than anticipated.

Figure 1: Technological innovation through nanotech could act as a market disruptor 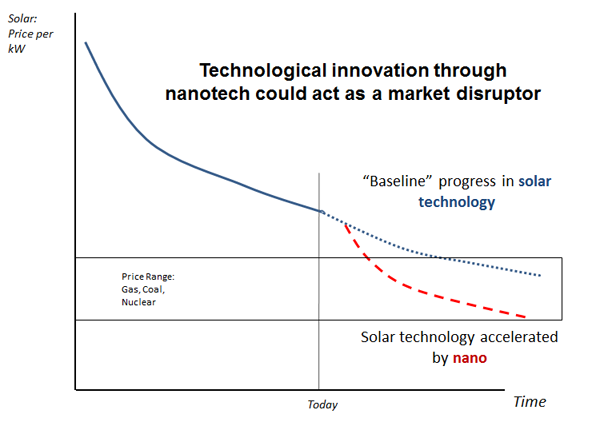 This images shows a graph depicting how “Technological innovation through nanotech could act as a market disruptor” with time on the x-axis and price per kW on the y-axis (solar).

In a somewhat more distant future, we may see electricity systems apply nanotechnology in transmission lines. Electricity transmission can experience losses due to resistance of approximately 1% over 160 km (AEP, 2013). This means that power generated in remote regions of provinces can diminish by as much as 17% (HydroOne, 2013) by the time it reaches urban areas. Research indicates that it is possible to develop electrical wires using carbon nanotubes that can carry higher loads and transmit without power losses even over hundreds of kilometres. The implications are significant, as it would increase the efficiency of generating power where the source is easiest to harness.  In concept, this would enable transmitting geothermal power from Alberta or wind power from the North across multiple provinces.

Nanotech could potentially transform how we use electricity through smart grids. Smart grids operate using a two-way flow of electricity and information, to enable the quick re-allocations of supply to match demand.   To build this, sensors are needed. Smart grids could be realized by incorporating nanosensors throughout the grid at various points, such as at transformers or even in appliances.  According to Dr. Pradeep Haldar, Vice President for Clean Energy Programs with the College of Nanoscale Science & Engineering at the University of Albany, “Without nanotechnology, you don’t have anything small enough, fast enough or cheap enough for the smart grid to fully evolve.”

Nanotech is also able to support conventional energy industries. Environmental effects of oil refining processes can be reduced at various stages of development:

Advances in nanotech are taking place all over the world.  The examples mentioned above are only a small sample of the various applications related to the energy industry.  There are equally fascinating developments in many other areas of nanotech.

These changes raise questions about the implications that emerging developments in nanotechnology may have for Canada’s economy, business investment strategies, and government policies. Is our energy industry and infrastructure sufficiently poised to take advantage of the innovations offered by nanotech? Do we have the necessary labour and skills expertise, and the right investment climate for technological uptake?