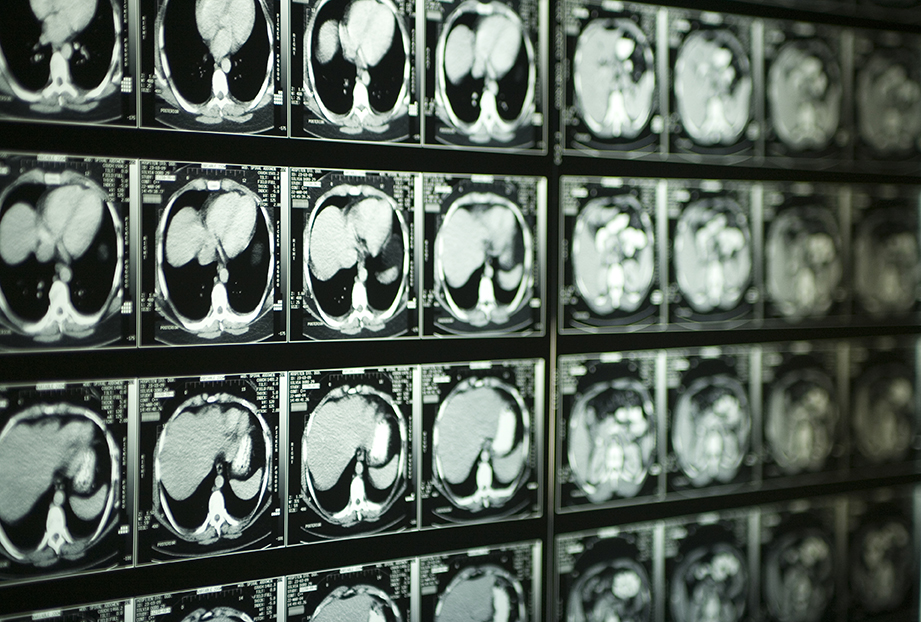 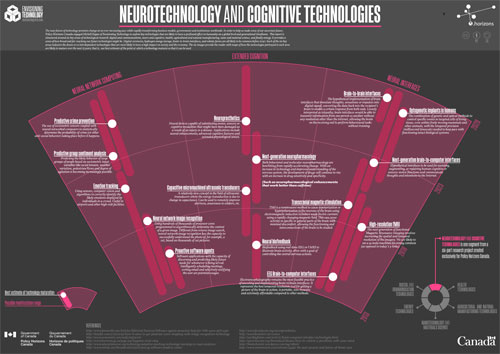 This diagram is 1 segment from a 6 part map on technology futures that offers a detailed look at potential technology advances in 6 key areas (digital and communications, neuro and cognitive, health, agriculture and natural manufacturing, nano and material science and energy) chosen for their likelihood for significant disruptive potential on work, life, firms and policy over the next 15 years. The visualization analyzes how neurotechnology and cognitive technology are likely to manifest over the next 15 years. It identifies three key areas of accelerating change: Neural Networking Computing, Extended Cognition and Neural Interfaces. In neural networking computing, significant changes are expected as a result of in proactive software agents, neural network image recognition, emotion tracking and tools that support predicting the likely behavior of large groups of people. In extended cognition, changes are likely to come through neural feedback, capacitive micro machined ultrasonic transducers, next-generation neuropharmacology and neuroprosthetics. Finally in neural interfaces, big changes are expected through advances in brain-to-computer interfaces transcranial magnetic stimulation, optogenetic implants in humans, and brain-to-brain interfaces.

Below are technologies related to neuro and cognitive under three key areas of accelerating change: Neural Network Computing, Extended Cognition and Neural Interfaces. Neural network computing will lead to improvements in computer vision and analysis, such as detecting emotions and moods, which may have safety and security applications. Extended cognition involves more direct connection to people’s brains, allowing mood, thought patterns and information to be altered in the brain. Neural interfaces get information out of people’s brains more efficiently, ultimately allowing a machine-enabled form of telepathy.

Proactive software agents: Software applications with the capacity of discerning and predicting likely future needs for whomever is being served. Intelligently scheduling meetings, sorting email and selectively notifying the user are potential usages.

Emotion tracking: Using sensors, computer vision and algorithms to correctly identify the likely emotions displayed by individuals in a crowd. Useful in airports and other high-risk facilities.

Predictive crime prevention: The use of sociometric sensors coupled with neural networked computers to statistically determine the probability of crime (or other anti-social behavior) taking place before it happens.

Neuroprosthetics: Neural devices capable of substituting motor, sensory or cognitive modalities that might have been damaged as a result of an injury or a disease. Applications include neural enhancements, advanced cognitive features and extended physiological senses.

EEG brain-to-computer interfaces: Electroencephalography remains the most feasible practice of executing and implementing brain to brain interfaces. It represents the best temporal-resolution tool for getting a picture of the brain in action, is portable, non-invasive and extremely affordable compared to other methods.

High-resolution fMRI: The next generation of functional Magnetic Resonance Imaging involves increasing the spatial and temporal resolution of the imagery. We are likely to see a 14-tesla machines becoming common (as opposed to today’s 3-tesla).

Transcranial magnetic stimulation: TMS is a noninvasive method to cause depolarization or hyperpolarization in the neurons of the brain using electromagnetic induction to induce weak electric currents using a rapidly changing magnetic field. This can cause activity in specific or general parts of the brain with minimal discomfort, allowing the functioning and interconnections of the brain to be studied.

Optogenetic implants in humans: The combination of genetic and optical methods to control specific events in targeted cells of living tissue, even within freely moving mammals and other animals, with the temporal precision (millisecond timescale) needed to keep pace with functioning intact biological systems.

Next-generation brain-to-computer interfaces: Hypothetical interfaces to be used for assisting, augmenting, or repairing human cognitive or sensory-motor functions and communicate thoughts and intentions to the Internet.

Brain-to-brain interfaces: The hypothetical implementation of brain interfaces that translate thoughts, sensations or impulses into digital signal, converting the data back into the recipient’s brain to enable a certain response from both ends. Loosely interpreted as telepathy, brain interfaces would be able to transmit information from one person so another without any mediation other than the internet, allowing the brain on the receiving end to perform behavioural tasks without training.