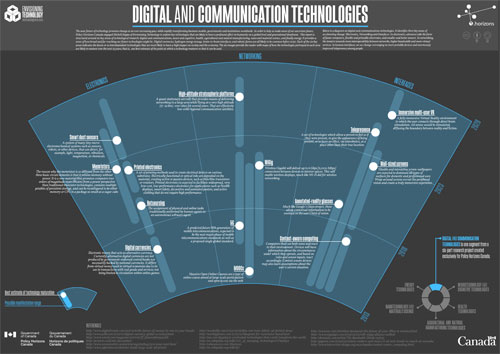 This diagram is 1 segment from a 6 part map on technology futures that offers a detailed look at potential technology advances in 6 key areas (digital and communications, neuro and cognitive, health, agriculture and natural manufacturing, nano and material science and energy) chosen for their likelihood for significant disruptive potential on work, life, firms and policy over the next 15 years. The visualization analyzes how digital and communications technologies are likely to manifest over the next 15 years. It identifies three key areas of accelerating change: Electronics, Networking and Interfaces. In electronics, significant changes are expected as a result of new digital currencies, botsourcing – that is, handing work off to robots, and 3D printable electronics. In networking, changes are likely to come through things like online, certifiable courses, internet 5G, wireless gigabit, and high-altitude stratospheric platforms. Finally in interfaces, big changes like computers that can both sense and react to their environment, augmented reality glasses, telepresence, and virtual reality controlled by the brain are potential game changers.

Below are technologies related to digital and communications under three key areas of accelerating change: Electronics, Networking and Interfaces. In electronics, advances take the form of faster computers, flexible and printable electronics, and smaller and better sensors. In networking, the trend is towards more interoperability between networks, higher bandwidth and more virtual services. In human interfaces, we see change converging on more portable devices and enormously improved telepresence between people.

Digital currencies: Electronic money that acts as alternative currency. Currently, alternative digital currencies are not produced by government-endorsed central banks nor necessarily backed by national currencies. It differs from virtual money used in virtual economies due to its use in transactions with real goods and services; not being limited to circulation within online games.

Botsourcing: The assignment of physical and online tasks traditionally performed by human agents to an autonomous software agent.

Smart dust sensors: A system of many tiny microelectromechanical systems such as sensors, robots, or other devices, that can detect, for example, light, temperature, vibration, magnetism, or chemicals.

Printed electronics: A set of printing methods used to create electrical devices on various substrates. Electrically functional or optical inks are deposited on the material, creating active or passive devices, such as thin film transistors or resistors. Printed electronics is expected to facilitate widespread, very low-cost, low-performance electronics for applications such as flexible displays, smart labels, decorative and animated posters, and active clothing that do not require high performance.

Memristors: The reason why the memristor is so different from the other three basic circuit elements is that it retains memory without power. It is a new material that promises computers two orders of magnitude more efficient from a power perspective than traditional transistor technologies, contains multiple petabits of persistent storage, and can be reconfigured to be either memory or CPU in a package as small as a sugar cube.

MOOCs: Massive Open Online Courses are a type of online course aimed at large-scale participation and open access via the web.

WiGig: Wireless Gigabit will deliver up to 6 Gbps [6,000 Mbps] connections between devices in interior spaces. This will enable wireless displays, much like Wi-Fi did for wireless networking.

High-altitude stratospheric platforms: A quasi-stationary aircraft that provides means of delivering networking to a large area while flying at a very high altitude (17–22 km) over cities for several years. They are effectively low-orbit regional communication satellites.

Context-aware computing: Computers that can both sense and react to their environment. Devices will have information about the circumstances under which they operate, and based on rules and sensor inputs, react accordingly. Context-aware devices may also learn assumptions about the user’s current situation.

Annotated-reality glasses: Much like Google’s Glass project, these allow contextual information to be overlaid on the user’s field of vision.

Wall-sized screens: Tileable and interactive screen-wallpapers are expected to dominate all types of surfaces for domestic and professional uses. Wrap-around screens recruit the peripheral vision and create a truly immersive experience

Telepresence: A set of technologies which allow a person to feel as if they were present, to give the appearance of being present, or to have an effect, via telerobotics, at a place other than their true location.

Immersive multi-user VR: A fully immersive Virtual Reality environment to which the user connects through direct brain stimulation. All senses would be stimulated, diffusing the boundary between reality and fiction.